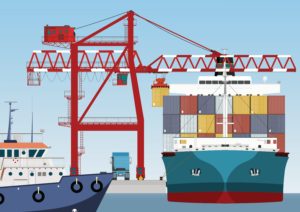 The drone attacks on Saudi Arabia’s oil facilities could have far-reaching consequences for ocean shipping. There are broader implications for all vessel types – on fuel pricing, chartering sentiment and possibly even trade politics – but crude tankers are most directly in the line of fire. Financial analysts’ views on how crude-tanker companies will be impacted run the gamut from one extreme to the other, with one warning that it is “very negative for tankers” and another arguing that it is “a bullish turn for the tanker market – period.” So who’s right? Tanker demand consequences hinge on whether this turns out to be a so-called “open chokepoint” or a “closed chokepoint” for cargo supply. In an open chokepoint, the temporary closure of one route or cargo source allows for either diversions around that blockage or replacement of the original cargo by another source; in either case, total cargo volume is unchanged but the average distance traveled changes as cargo flows around the obstruction. This scenario is usually positive for bulk cargo shipping (but not scheduled container shipping). The most famous examples of an open chokepoint were the closures of the Suez Canal in 1956 and 1967-75, which spawned fortunes for tanker owners including Aristotle Onassis. Tankers were required to circumvent Africa, a much longer voyage than the Suez route. If the same volume of cargo is forced to be carried longer distances due to a sudden geopolitical event, extreme weather or some other reason, it soaks up more vessel capacity, increasing freight rates.
READ MORE >